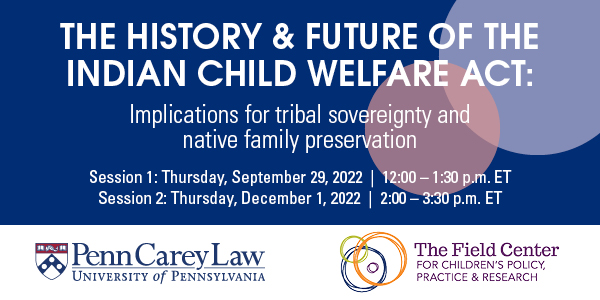 Session 2: Consequences and Implications of the Supreme Court Case

The panel of legal experts and academics discuss the potential implications of the HAALAND V. BRACKEEN Supreme Court case for ICWA and tribal sovereignty.

Across the country, there are 574 federally recognized Native American tribes that have a government-to-government relationship with the United States. As sovereign nations, they have legal jurisdiction over their lands and citizens. However, until the passing of the Indian Child Welfare Act of 1978 (ICWA), the authority of Tribes to exercise their exclusive jurisdiction over their Native children in child custody proceedings was not recognized. ICWA established procedural guidelines for placement and removal protocols that mandate notice to Native families and Tribes in all pending child custody proceedings to prioritize family integrity and adhere to tribal sovereignty. In recent years, ICWA has been a legal battleground between non-native families seeking to adopt native children and native families trying to keep children connected to their culture and communities. The current legal challenge to ICWA is headed to the Supreme Court, which could either reaffirm the constitutionality of the law acknowledging the special relationship between tribes and the federal government or strike it down as an unconstitutional “race-based” law in violation of equal protection and states’ rights.

Wenona T. Singel, Associate Professor of Law at Michigan State University College of Law and the Director of the Indigenous Law & Policy Center.